After a holiday hiatus, our Class and Money Matters Series continues with single mother Kimberly S. Thomas, who writes beautifully of the ways in which financial hardship can make us question our parenting. 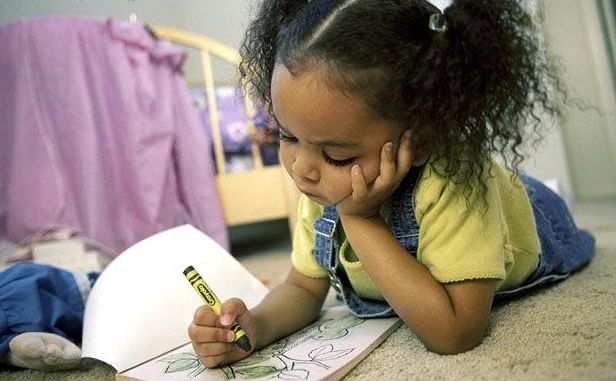 I knew I may not be able to give my daughter everything I wanted to, but I never imagined I would have to take things from her.

The first to go were her swimming lessons. Determined that she would not be not part of the alarming statistic of the 70% of African-American children who cannot swim, I signed her up for classes at the local YMCA. Next to go were her math enrichment classes. Curbing her dislike for math before it took hold and developed into a full blown phobia was a priority for me. She fell in love with the class and didn’t mind forgoing her Saturday morning cartoons to attend. I remind myself daily that these are First World problems and things could be worse – like not having shelter, food or clean drinking water. Unfortunately, that rationale doesn’t always work with the elementary school set.

The last and most crushing (to her) to go was Netflix. Cable is a luxury we can’t afford and, at $7.99 per month, Netflix suited our needs with its unlimited supply of children’s shows. Currently, she is making do with her old DVD’s and six to (depending on the weather) eight channels.

Before I fell down the rabbit hole of single motherhood, I had a plan: I was going to attend graduate school at New York University, immerse myself in books, research history and eventually live in Brooklyn. In the midst of planning, I received a phone call that my father had died. Still reeling from his recent passing, I continued a relationship with someone I had planned on breaking up with. Five months later, I became pregnant with my daughter.

My family had disapproved of my daughter’s father on sight – at my father’s funeral. My grandmother (in that no nonsense way that elderly black women can have) didn’t hold back her opinions. She warned me he wasn’t “going to amount to anything.”

That I would graduate from college was a foregone conclusion in my family. The importance of education was something instilled in my siblings and I from an early age. My grandmother saw my relationship as a dangerous step down from my climb to upward mobility. My solidly working class parents, had at times, worked two jobs to ensure we had what we needed and a few extras.

I had a difficult pregnancy.  “Now whose fault is that?” my grandmother asked, upon hearing that I had been hospitalized. “You made your bed, now lie in it.”

Having to ask my mother for financial assistance was confirmation of my grandmother’s prediction. Afraid that I would lose my baby, every morning, I marked an “X” on the calendar that she was still with me until we were well into our second trimester. I promised the growing life inside of me that, if she stayed, I would give her the world.

For the first couple of years, we qualified for Medicaid and food stamps. Her father is a jazz musician, and I was working at a non-profit for a few dollars above minimum wage. Once I landed a better paying job, things were supposed to be easier. The loss of benefits and my desire to plan for the future led to tension and resentment between the musician and I. We tried to make it work, but after two years of emotional, mental and, finally, physical abuse, I took my daughter and left.

For months after our departure, I had to train my daughter not to refer to me as “bitch” when she was having a toddler tantrum.

Despite having a college degree and, by many standards, a good job with benefits, the years since have been difficult.  On paper – I should have a $500 surplus every month to save for a down payment on a home, college savings and retirement. The reality is much starker as we continuously straddle the line between lower middle class and an utter freefall into poverty.

Each time things fall apart, I feel like a failure having to explain to her why certain things she had grown used to were no longer there. It’s become the norm to make excuses for why she couldn’t have the birthday party at Magic Mountain and the present she wanted, the outings with her friends …

We’ve received sporadic child support. I’ve had many absences from work due to not having spur-of-the-moment child care when one of my daughter’s frequent health issues flares. These have meant a substantial loss of income after my sick and vacation time is depleted.  I have not asked my family members for assistance in four years.

We have a wonderful support system in friends and my daughter’s godmother but at times it has not been enough. Rent is due every month along with every other bill that comes with adulthood and motherhood. Her paternal grandmother helps us when she can and that has been a blessing, although the emotional turmoil that comes with it has not.

Recently, on one particularly bad day when my car died on the side of the highway, I wondered if my daughter would be better off with another mother. Someone who could give her more financially.

At times, it is easy to imagine my life before her, but I can no longer imagine a world without her. She is everywhere. Her toys, her books, her permanent marks on the table where she has tried “to make science” and her folders where she keeps her stories and drawings. I opened one of her folders and there we were – page after page of us. Stories of our adventures together and numerous pictures of us holding hands with colorful hearts everywhere.

I may not be able to give her everything, but my daughter will always have a never ending supply of unconditional love.

Kimberly S. Thomas is the mother of one mischievous and adorable 7-year-old daughter. She lives in Columbus, OH and can be found on Twitter (rarely) at @TwoExesN.